Norberto: On Doing What You Love

His parents were farmers. They grew maize, potatoes, wheat, and beans. This is how Norberto grew up, on a farm in Boyacá, Colombia, with his parents and his nine brothers and sisters. His parents’ hard and dedicated work was the basis of the family’s economy: “my parents harvested and sold the produce, and we fed ourselves from the farm. That’s how they got us through,” Norberto tells us.

From a young age, all the siblings learned to help out on the farm, a childhood that provided Norberto with an unparalleled amount of tools and knowledge.

For 27 years, the countryside was his home, his work and his passion. However, Norberto and his family faced the difficult context of the armed conflict, which affected thousands of farming families in Colombia. Colombia’s armed conflict, a social, political, and economic issue that has plagued the country for decades, had its violent peak between 1988 and 2012, and resulted in the massive forced displacement of thousands of families, including Norberto’s. The violence that plagued the region forced Norberto to leave the countryside and leave his home in search of a better life. That is how Norberto arrived in Bogotá in 1999: without any friends or contacts, and with a new family in his care. He and his wife, like many Colombian farmers, were suddenly forced to build a new life, in an unknown and alien environment.Fortunately, his childhood in Boyacá had given him invaluable knowledge, skills that she could easily transfer to job opportunities in an urban context. “Farming isn’t just about working the crops,” he tells us. As a child, Norberto became interested in the construction work on the farm. That interest earned him the skills he applied to his first construction jobs in Bogotá. Once in his new life, masonry allowed him to learn how to operate heavy machinery, work in which he found a new passion. From then on, his working life took a turn: once again, Norberto loved what he did. 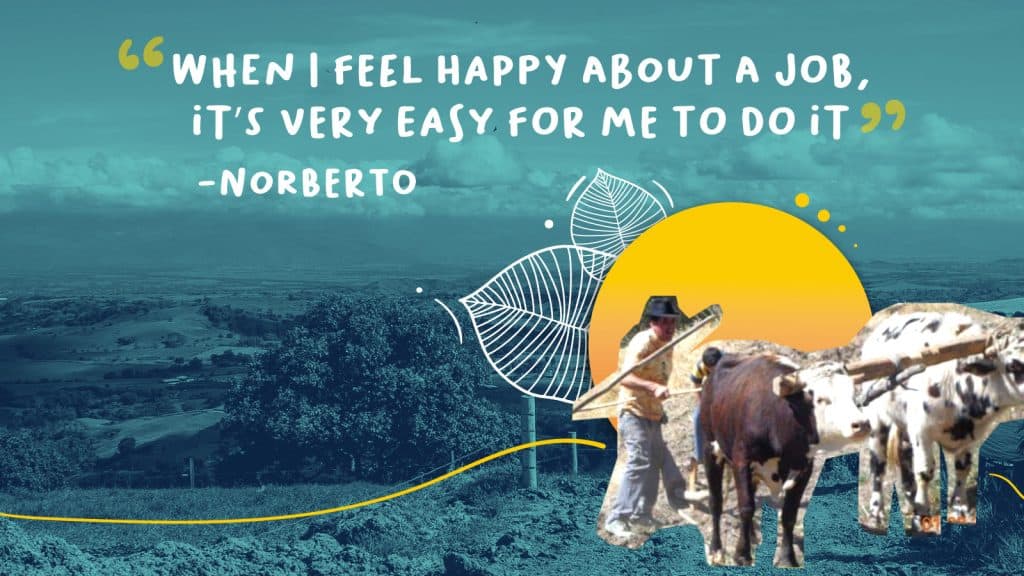 The following years were a period of growth for Norberto and his new family. His son was born in Bogotá, bringing new hope into his life —along with an infinite number of responsibilities: the responsibility of being a father, of guiding a new life, but also of creating a different world for future generations. In 20 years of urban life (and 16 years of parenting), Norberto learned to cultivate again —no longer the maize and wheat of his childhood, but adaptability, autonomy, and resilience. And all of this always with the fortune of working in what he was passionate about.

While adapting to urban life, Norberto explored the captivating world of yellow machinery, as he calls it. It was through this world that a few years later he met Graham Day, CFO of Sistema.bio, a friendship that opened the door to a new life in which Norberto managed to unite his two devotions: farming and engineering.

Noberto started working as a technician at Sistema.bio in 2018, when we were just starting our work in Colombia. Although he had no previous knowledge of biodigesters, his engineering experience and his already trained self-education abilities allowed him to adapt quickly to the job. He is now one of the most active members of the team, and is in charge of the vast majority of installations on the Colombian territory —installations that he often carries out alone. In the last two years, Norberto has earned the admiration of everyone at Sistema.bio for his commitment, for the passion he brings to his work —commitment and passion that drive him in the long journeys he makes to visit, train and serve each and every one of our users.

Norberto is a technician, but his work goes far beyond technique. In addition to his engineering skills, his warmth and farming experience allow him to build deep relationships with each user he visits. For him, every interaction with the farmers is pleasant, because it takes him back to where he was born, where he learned the things that allow him to have the life he wants and the job he loves. “I like to interact with people. Approaching people that work in farming is pleasant for me because I connect very quickly,” he says.

Norberto knows farmwork at the core, he knows the secrets of the soil, the crops and the seeds. This inherited and experiential wisdom is what allows him to connect with each of the farming families he meets on his visits. Above all, it allows him to know and understand the challenges they face. “The farmer is the one who works the hardest and earns the least,” he tells us, a hard truth that becomes global especially in the context of contemporary capitalism.

Over the years, we have learned more and more about the issues that our users face, and we know that many of them come from one source: the unequal trading system that exploits millions and benefits a few. “The farmer gives their life in their crops and the middleman is the one who takes all the money,” Norberto tells us, a clear reminder and an invitation to review our consumption practices.

Small farmers feed the world, yet they are often the ones who face the worst economic situations. That is why it is so important for us to focus on them. We work hard because farmers work hard, day in and day out, and it is always a pleasure for us to contribute to the economy of the millions of families who live off their lands. 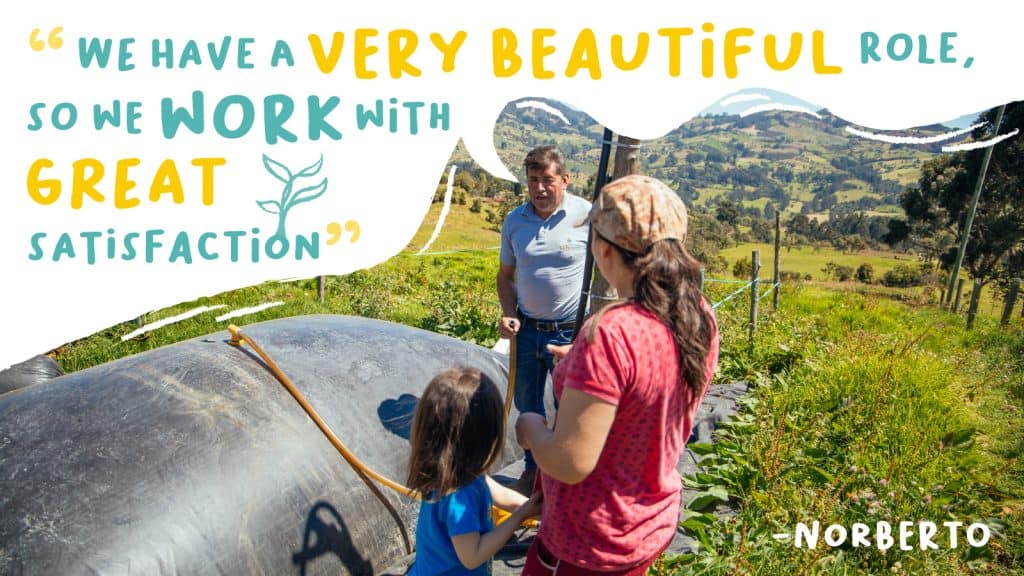 Since joining the team, Norberto has learned not only everything about how biodigesters work but also about the history of biogas in the region. During his long journeys through the Colombian roads and his extensive conversations with users, Norberto has come to know different types of biodigesters, mostly rustic ones, with which Colombian farmers have worked over the years.

In these ten years, we have met many people who find it difficult to trust our products, from Colombia to India —and in many of the corners of the world we have visited. The reason: rustic biodigesters and the low quality of many of the products on the market. That has been one of the great difficulties the team has faced in Colombia, Norberto tells us: “Our farmers had lost that faith in biodigesters. It was a little difficult to arrive with our systems because people were not convinced, precisely because there were some (rustic) installations that did not work or that didn’t last very long.”

Despite these difficulties, Norberto and the rest of the team have managed to make our users see not only the quality of our biodigesters, but also the importance they have for Colombia’s —and the world’s— environment.

This year we have been forced to unite in the face of a pandemic. COVID-19, which spread around the world like wildfire spreads through the forest, has forced us to stop and ask ourselves questions that, perhaps, we didn’t want to ask ourselves. Does the system we have really work? Can we continue with the same consumption practices, the same exploitation? And, above all, what is the future we want for the world?

The universe is made up of ecosystems. And for ecosystems to work, there needs to be a balance, an equitable relationship between the parts. Among the many things we have learned in this difficult year, we have become more aware than ever of our fragility, of the fragility of our lives and of our planet. It is time to change gears and focus on taking care of this Earth. 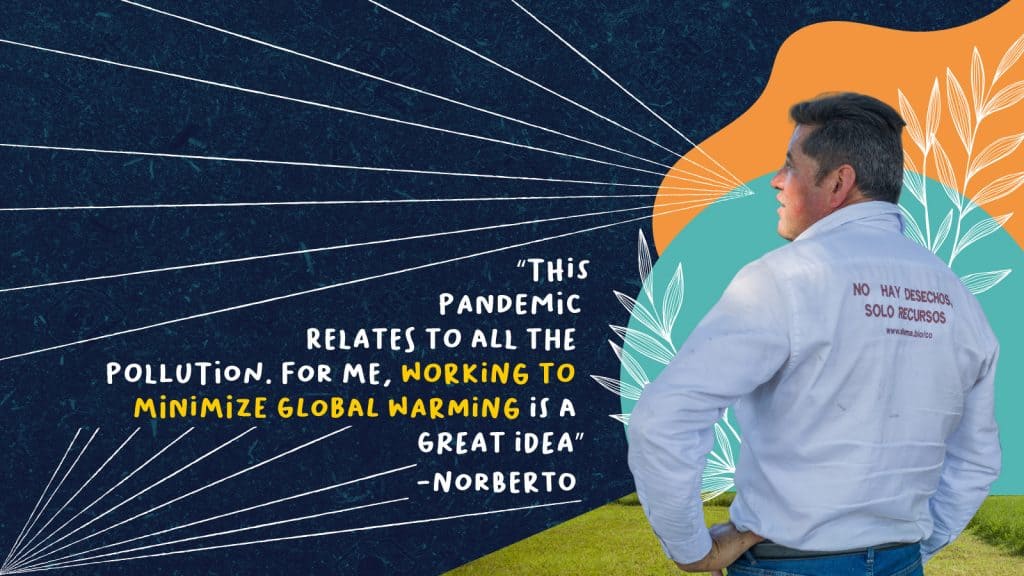 It is well known that the Earth has finite resources and that humanity has exploited everything that has come its way. Now it’s time to exploit different kinds of resources: creativity, collaboration, the incomparable human inventiveness to find solutions to the problems that afflict us. Above all, we have to make use of all the things that go unnoticed: rainwater, solar energy, dung. It is up to us to stop going to the forests to collect wood, to stop pouring the things that are in our way into the rivers. It’s up to us to leave the rainforest and the mountains alone and instead focus on taking care of the agricultural land we already have.

Past generations have given us a lot. They left behind problems for us to solve, yes, but they have also left us wisdom, traditions, cultures, ways of doing. Now it is up to us to take all those inheritances and transform them, to turn what we have learned into a world that we can pass on to future generations. The love for the countryside that Norberto’s parents instilled in him is a perfect example of our capacity for transformation, for creativity. Norberto has returned to work the land, now from an environmental awareness and a desire to cultivate new ways of inhabiting the world.

For Norberto, this is the greatest value of his work: the opportunity to participate in change, to take care of our planet. Because coming from the countryside, he knows in depth the wonderful gifts that this Earth gives us day by day. And those of us who have seen the treasure will dedicate our lives to taking care of it. 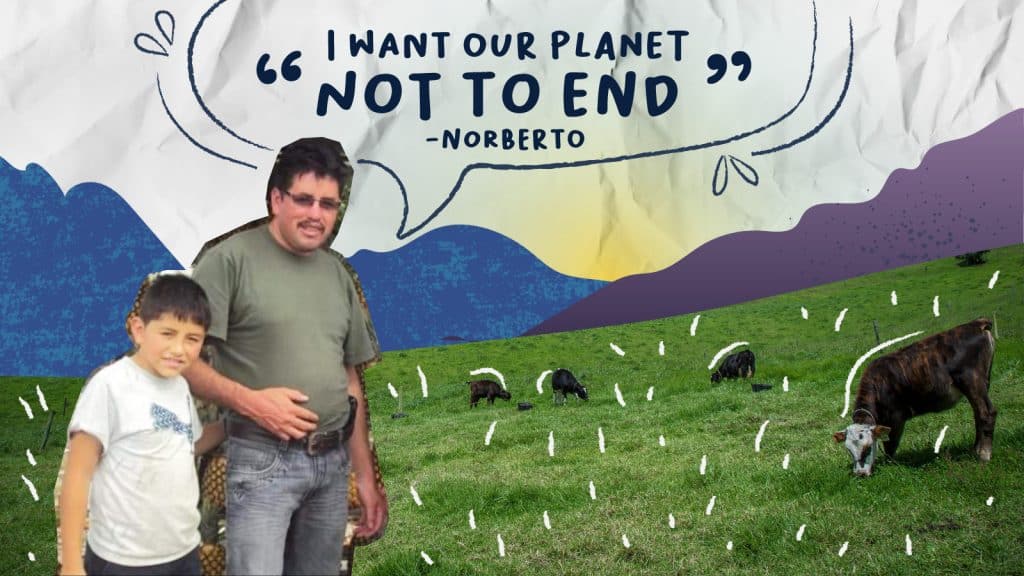