Indian women taking control of their lives through biodigesters

Women compose the majority of the workforce in agriculture worldwide. In India, there are over 150 million farmers out of which, as per official numbers, only 60 million women are involved in agriculture. The number, in reality, would certainly be higher, as women in every farmer household in rural India participate in agriculture in one way or another. While some are the primary breadwinners of agricultural households, some are forced to work on the field due to the unavailability of a man in the house, and almost all help out in sowing, reaping, watering the crops, harvesting, and many other substantial tasks.

A study by Oxfam concluded that women spend about 3,300 hours in farming per year. In addition, a woman’s role in a rural household expands to that of a caretaker, cook, and manager. To add to the women’s list of tasks, a majority of rural households still use firewood for cooking and heating, and the women of the house are responsible for fetching the firewood early in the morning. So including domestic chores, a woman works without any monetary remuneration anywhere between 10-12 hours every day.

One such woman is Shubhangi, a 28 year old female farmer and mother of three toddlers. Shubhangi lives in Somanthali, a small village in Satara district of Maharashtra. While she is not engaged in any formal job, Shubhangi assists her husband and father-in-law in farming. They work together on the field while sowing seeds, putting biofertilizer in crops, maintaining the crops, and harvesting the final produce, among many other things. Additionally, she takes care of 14 family members, cooks for the whole household, cleans the house, washes utensils, and feeds the farm animals on a daily basis. A year ago, all this work meant that Shubhangi never had any time for herself. 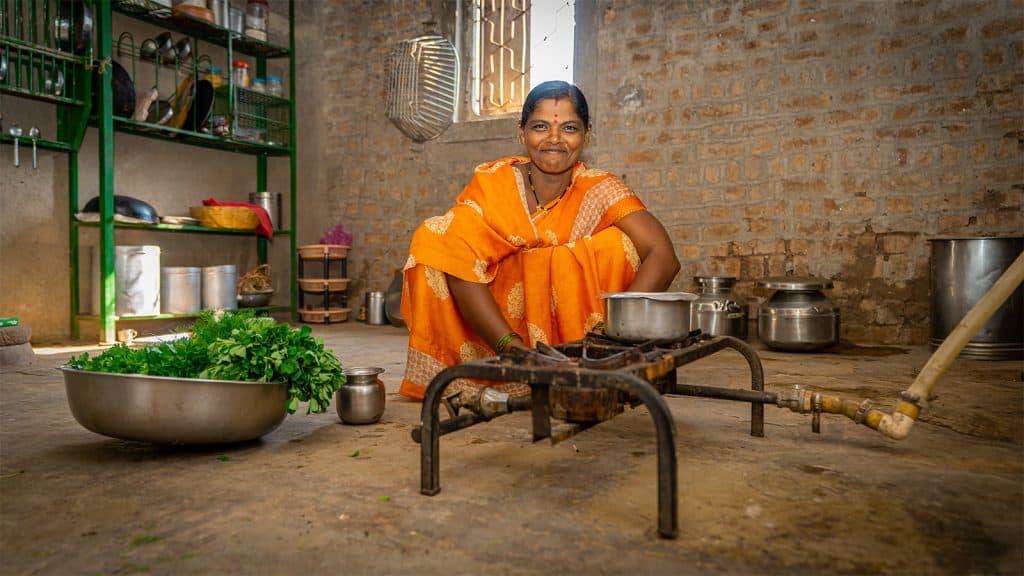 One day in 2018, Shubhangi’s husband told her that they were buying a biogas plant. While she had seen a lot of brick and mortar biogas plants in her village, she had never seen one work. With 20 cows, Shubhangi’s family went for a Sistema 20 model, which gives them 13 hours of clean cooking gas every day, the equivalent of 6 LPG cylinders.

When I visited, Shubhangi moved around the house with such ease, her face beaming with a wide smile. “I had always cooked with firewood. I would wake up at 5:00 am to fetch firewood, which would take me an hour to collect. After that, I used to take 1.5 hours to cook one meal. Since there are 15 people in the family, using LPG was unaffordable for us. We used to buy only one cylinder of LPG for emergency purposes. I remember coughing a lot while cooking. My eyes would always be watery along with a burning sensation whenever I was in the kitchen”, she said.

“After a month of installation, we saw a blue flame in our biogas stove. I started cooking using biogas and I have not used firewood since then. My eyes are not watery anymore. I still wake up at 5 am, but now I spend that time having tea with my husband,” Shubhangi added. 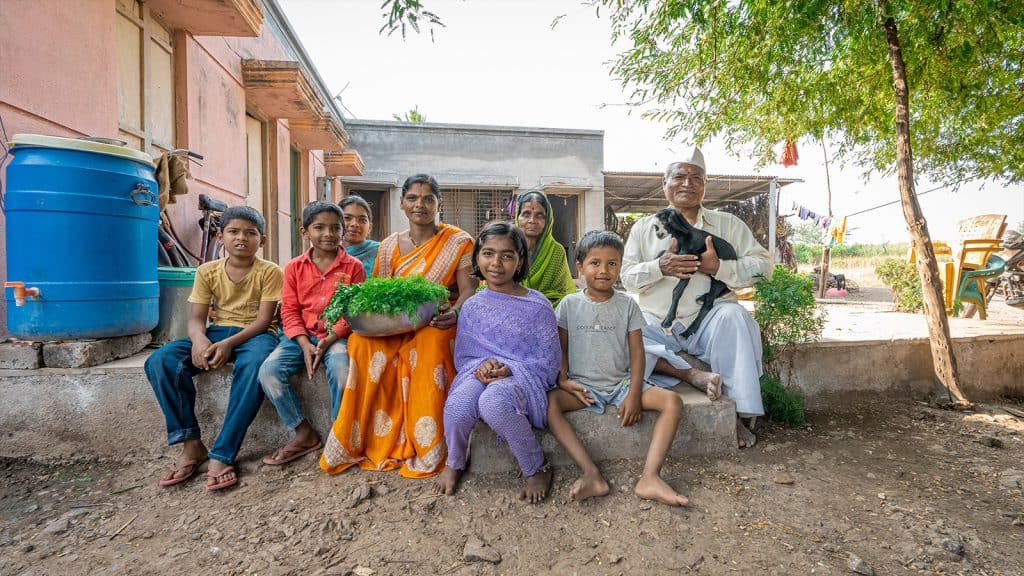 She rushed her daughter to bring some fresh methi leaves (fenugreek) from their farm, along with spinach and coriander, and flaunted them happily. Prior to purchasing the digester, Shubhangi only used her farm to grow corn, grains and forage, but now they grow many vegetables as well. “Whenever I am cooking, I just walk to the farm and get fresh vegetables grown using our very own biofertilizer. I feel self-sufficient.”

In another village, not too far away from Shubhangi, lives Radhika. She has been married for more than fifteen years now, and has two high schoolers as kids. In a village where most people live in joint families with their parents and siblings, Radhika’s family is an exception. They live in a nuclear family, with 8 cows and 1 dog acting as their extended family.

When Radhika got married, she developed quite an interest in cooking. She liked to experiment with different vegetables and spices and invent new dishes. But that often proved to be a challenge with a chulha, a traditional Indian cookstove fueled by firewood. First, she had to spend an hour or two collecting firewood, then another hour igniting the chulha. In the monsoon season, she would spend additional time drying the firewood before starting to cook. She finally convinced her husband to switch to LPG. While LPG was easier, it was delivered only to the main market, which was 3km away from their house. 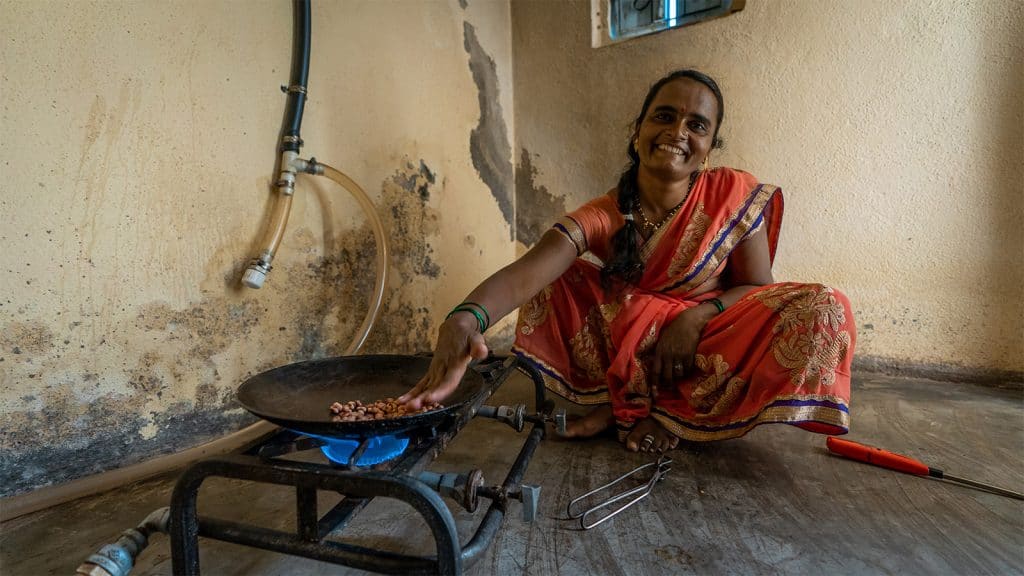 Radhika’s family would often host relatives for lunch or dinner, where she would get a chance to flaunt her cooking skills. One day while she was hosting her sister’s family, she ran out of LPG in the middle of her cooking. Embarrassed, Radhika did not know what to do. She had to ask her neighbour for a cylinder, for which they had to pay a hefty amount. This happened a couple of more times; sometimes they would have a backup, but Radhika was still disappointed. Spending Rs. 1000 (US$14) every month, and still running out of gas on important occasions was not something Radhika had signed up for. She wanted a more reliable solution.

When a Sistema.bio representative visited her house in 2019 to spread awareness about biogas, Radhika saw merit in the technology. While her husband was mainly interested in the organic fertilizer, she thought that biogas might be the solution to her problems. “We got a Sistema 8 model installed in our backyard. It gives us 4.5 hours of cooking every day, which gives me plenty of time to experiment with food for my kids”, Radhika told me excitedly.

“We know that we have to feed the digester every morning, which is barely a half an hour job. The cow dung, which earlier was difficult to discard and produced a terrible stench in our house, is now collected by my husband early in the morning to feed our biogas plant. I add the water to it”, Radhika added. 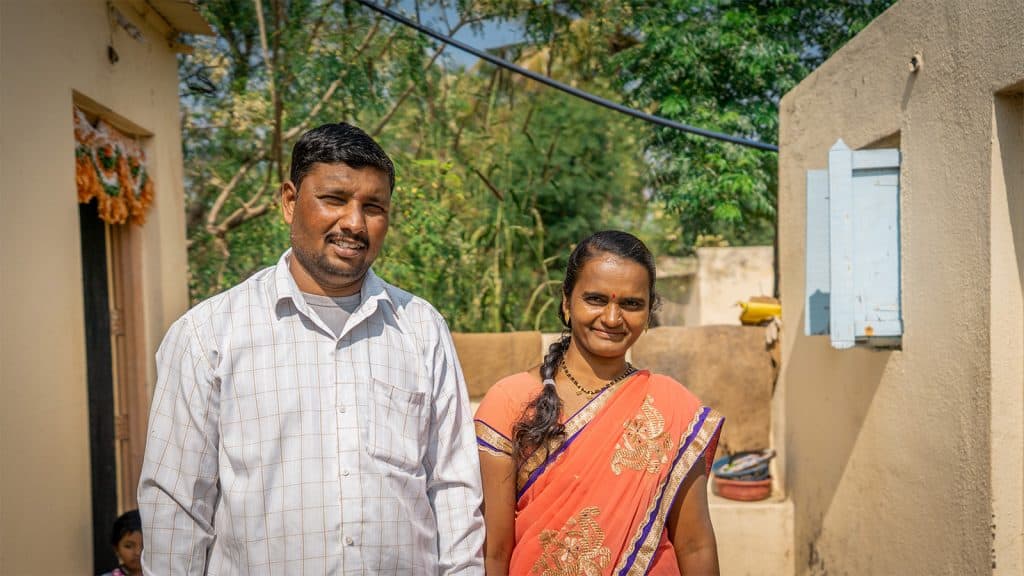 The best thing about the digester, in Radhika’s opinion, is that the house feels much cleaner now and she never runs out of gas in the kitchen. She feels like she has control over her life. The additional time in the morning helps her plan her day better.

Sistema.bio digesters are now a part of over 10,000 farming households in India. When our teams go on ground to speak to these farmers, we realise that the impact that our biogas plants have had on people is far beyond what we had envisioned. A multitude of women are utilising the biogas plants to take control of their lives, uplifting themselves and others around them.

At Sistema.bio, we take pride in being associated with such powerful women whose stories leave us awestruck. In a society where women have to face so many challenges, we applaud their indomitable courage to take charge and do wonders!