Oscar: The farms of tomorrow

Oscar grew up in the city, and yet he blossomed in the countryside. For the past 20 years, he has dedicated his life not only to farming but to finding new ways of farming, new ways of conceiving it.

He was born and raised in Bogota, city where for many years he worked in transportation. It was there that he met Alicia, his wife, who grew up on a farm in Cundinamarca. In the year 2000, they made the decision to leave the city and move to Alicia’s family farm with their four children.

Now their lives are different. Their children live away from home and work in psychology, zootechnics, chemical engineering and biology. Alicia works as an educator in Bogota, and Oscar works on the farm.

Early morning, Oscar takes his coffee (or tinto, as he calls it) before leaving for his morning walk around the farm. After his tinto, he visits the cows, the pigs, the rabbits and the dogs. And once he has visited all the animals, he takes off with the tasks of the day: harvesting coffee, sugarcane or fodder —tasks that now include feeding his biodigester, gathering biofertilizer and feeding the crops with it. “You wake up at the break of dawn and suddenly, without noticing it, the day is over. Time flies here. It’s a very healthy life, and a very good one.” 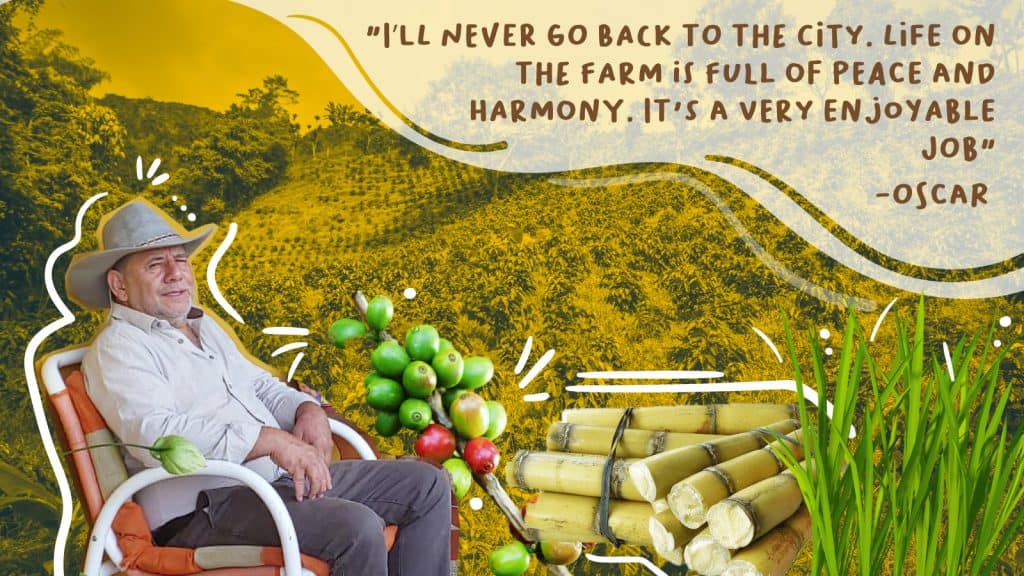 Moving from the city to the countryside was very easy for Oscar, not only because of the delight he finds in farming but also due to the relationships that, years earlier, he started building. Way before moving to Villa Alicia, Oscar started to relate to the farmers in the region, learning all about the problems and challenges they faced. Along those years he met the pig farmers with whom now he has built an association. “The small pig farmer suffers a lot because of intermediates, who never pay what a farmer deserves to earn. With the association we strive for reaching the market directly so we don’t lose so much money,” he tells us.

Now Oscar is an expert in pig farming. In collaboration with small pig farmers in the region, he stays up to date on the market’s situation in Colombia and the world. And it is because of that attention that he has found new levels of potential in biogas.

Oscar purchased his Sistema.bio biodigester two years ago, but his experience with biogas started much earlier than that. Before getting our system, he dabbled in the world of anaerobic digestion with rustic biodigesters, which he still operates on the side. He discovered our models in an agriculture fair, and since then he has been spreading information about our work among farmers in the region —even before having a system of his own, Oscar was talking about Sistema.bio with his colleagues. And now that he has his own, his trust in Sistema.bio has done nothing but grow: “The biodigester that I have found the most effective is Sistema.bio because of its sturdiness. It’s a very good system.”

In these 10 years, we have had the fortune of getting to know passionate and self-sufficient farmers, men and women who find in biogas and sustainable practices the potential for doing far greater things. Oscar is one of them. For the past few years, Oscar has been researching sustainable agriculture practices —as well as experimenting and designing new tools. Now, in collaboration with the National Learning Service of Colombia, he is working on the creation of a biogas-based food dehydrator. With this marvelous tool, Oscar wants to give farmers a new way of managing and storing farm produce, while contributing to the economy of small pig farmers: “We have a problem in Colombia in terms of animal feed. The prices have skyrocketed, and now pig farmers spend 75% of the money on feeding the animals, with only 25% left for income and maintenance. The idea here is to find a way to lower the costs for the small pig farmer.” 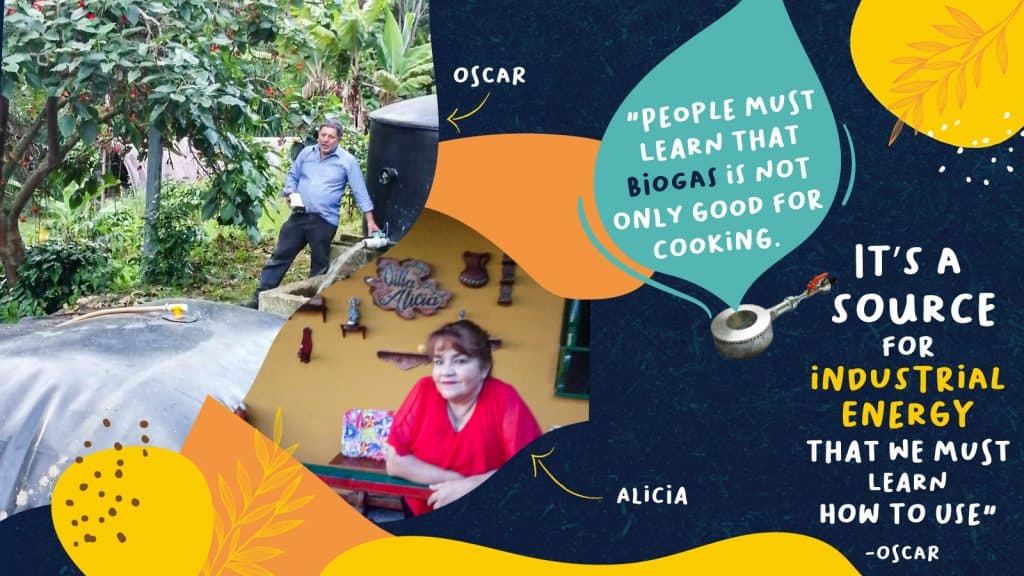 Oscar’s goal is to have a fully self-sufficient and sustainable farm. Far beyond that, he works so that sustainable agriculture becomes the norm for all farmers. This goal, Oscar tells us, will only be achieved if we keep in mind who exactly is working the land, as well as what it is that they need: “what is happening in the region is that the ones who have stayed in the farms are old people. Young people want to move to the city, and I don’t think the problem applies only to Latin America —it’s happening all over the world. What we have to do is find ways to make things easier so that the elderly can manage it.”

In his opinion, the real challenge is to design infrastructure that makes farm work easier, more efficient, and less expensive. Biodigesters, Oscar tells us, have the potential to contribute to that goal while helping the environment.

Like Oscar, in Sistema.bio we know that wherever there is a problem, there is a solution. We know that small farmers work hard and that the world depends on them. That is why we do what we do, why we get up every day to collaborate with them in the creation of a more sustainable, fairer world.

For us, Oscar is a clear example of the potential of human curiosity. That in this world there is no waste, only resources. And the future of agriculture, Oscar reminds us, will depend on our capability to make the most out of those resources. 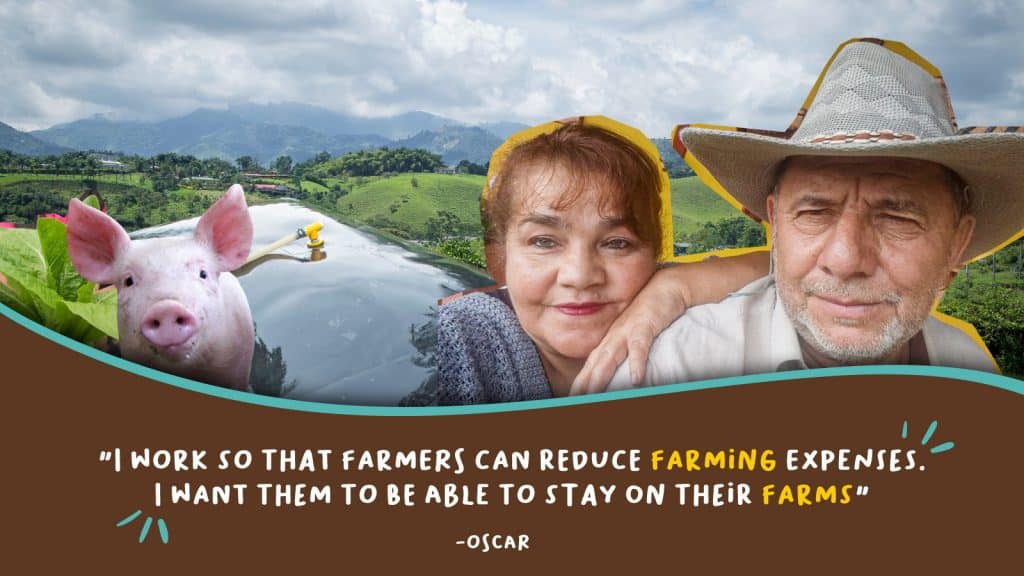