The Joy of Farming has Been Restored

Enter the Cheges. A little shy, very charming, and very smiley; that’s Joslyn for you, the family’s matriarch. Thomas, her husband, radiates authority and bravado; but there’s a tenderness there that only Josylyn brings out. Away from the hustle and bustle of the big city, on the outskirts of Thika town, this couple has found a second home; and new love. Dairy farming!

When they started their farming journey almost ten years ago, nothing prepared them for the twists and turns that came with it. Between juggling their very demanding careers in the Humanitarian sector and parenting their two boys, they hardly had any time to themselves let alone a whole other occupation. That they lived in Nairobi and their farm was in Thika, did not help the situation. Josylyn says that they almost gave up farming altogether when their poultry project was mismanaged by a farm employee because none of them was around to supervise. The losses were too many and the college fees for their two boys; now young men were not letting up.

Not one to give up easily, Thomas encouraged his wife and brought home two small calves. They did not know it then, but that was the moment they struck a gold mine; a green gold mine. Their two calves grew and gave birth to others, and slowly but surely their herd grew. They started selling milk from their cows and their confidence in farming was reinstated. Their boys were doing well; one was in law school and the other one studying statistics. Things were looking up for the Cheges.

It is at this point that Josylyn started making frequent weekend trips to their farm in Thika, and the peace and quiet she experienced here were unrivaled. The weekend trips turned into longer visits, and with the Covid pandemic allowing her to work from home, she spent more time at the farm than in Nairobi. She got to know and form relationships with their neighbors on the farm, which is where she learned about Sistema.bio; an organization that “changed her life”.

After prodding her neighbor with numerous questions about their Sistema.bio digesters and seeing the benefits firsthand, she made up her mind. She had to get one for her farm. It didn’t take a lot of convincing to get Thomas on board, and in a few months, the unanimous decision was made. Thomas says that the team at Sistema.bio patiently took him and the farmhand through the whole process, explaining how everything works, and answering all their questions. The well-thought-out technology and the ease of operation had them sold, he says.

Given the size of their farm and the number of their animals, the technical team proposed a Sistema 16. The flexible and affordable payment plan made it easy for them to have the biodigester installed in about a month. 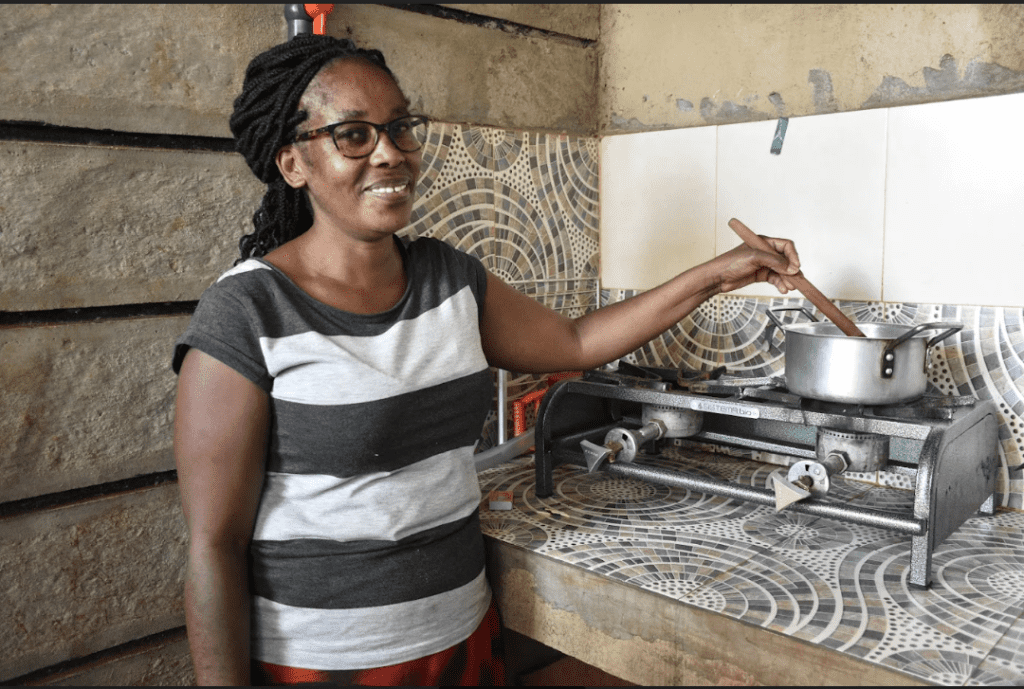 Six months later, the couple says that the biodigester has been a game-changer in their farming. Josylyn says that despite the LP gas prices going up by over 65% in the country, their decision to install the digester has cushioned them from the pinch. Let’s do the math: previously, Joselyn’s family used the 13kg LP gas a month; which goes for KES 1300 in her area. With their Sistema.bio digester, the family gets up to 10 hours of cooking time daily; which is equivalent to 62kgs of LP gas. This means that Joselyn can comfortably  boil githeri (a mixture of maize and beans), and other legumes that take longer to cook, without worrying about the cost implications. Moses, the farm help, tells us that he can now comfortably boil tons of water up to two times a day for the milking process; something that his employers had previously forbidden him to do using LP gas. Joselyn all smiles because she no longer has to use charcoal and firewood; her eyes are all cleared up and her kitchen is always sparkling.

Thomas says that the biodigester has helped them to manage the dung from their twenty herds of cattle; and has cleared up all the flies and bad stench that previously loomed over the cowshed area. He says that in a day, they are able to collect between 300 and 390 liters of biofertilizer (between 30 to 39 buckets). From this fertilizer, their grapevine is flourishing, the tomatoes look juicy, and the greens behind Josylyn’s kitchen have never looked healthier. Thomas says that they have their neighbors lining up for the extra biofertilizer every week, which earns them an extra coin or two.

Farming has become so enjoyable and rewarding, that Thomas divulges to us his plans to leave active employment and go into consultancy; to enable him better concentrate on his farm. Joslyn all smiles as she shyly tells us that she feels like a young girl again; now that her ‘boys’ have left the nest. She also plans to use her free time in supporting Thomas to grow and expand their farming activities. As if on cue, Hope, the youngest calf in the herd, makes her way to Joselyn mid-conversation, for some cuddles and belly rubs.  Did we forget to mention that this couple has given beautiful names to all their cows? They have Promise, Hope, Baraka…that is how invested they are; and we love being part of their journey.